How Virtual Reality Is Changing Education 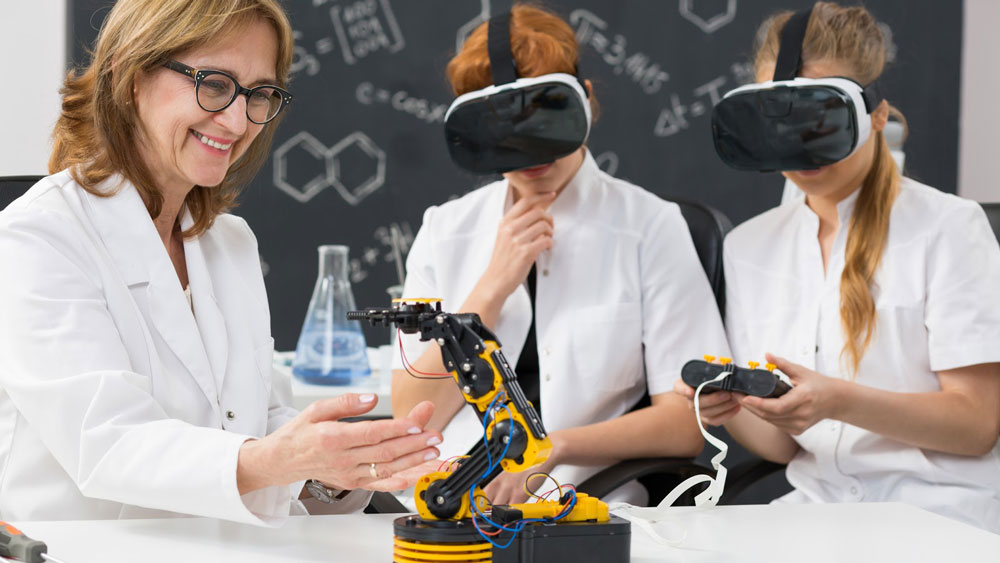 Virtual reality (VR) first surfaced in the 1935 science fiction short story “Pygmalion’s Spectacles.” This idea was revolutionary for the time and, like walking on the moon, only a dream. However, just like Neil Armstrong became the first person on the moon, VR went from an idea on paper to a tool used in classrooms by more than 6 million students, according to CNN.


The Path to Virtual Reality in Education

How did futuristic technology become so widely accessible? According to Wired, it began with the Oculus Rift—a headset released in 2012 connected to a monitor that immersed the user in a 3D realm. Since its introduction, VR has shifted not only how we experience video games but also how we experience the entire digital space, including the use of virtual reality in education.

Since 2012, VR has experienced a vast technological revolution. As headsets have gotten smaller, mobile, and more powerful, the technology has become vastly more accessible. Additionally, 5G cellphones have made it possible to access the virtual realm from anywhere.

This increased accessibility has made VR a feasible option for schools. Cameras that offer 360-degree recording and new apps such as Google Expeditions have brought VR into the classroom, creating opportunities for teachers and students to approach education like never before. According to tech website Built In, the use of VR in classrooms is predicted to increase dramatically over the next five years.

The way students learn hasn’t evolved much throughout the course of history. Fact retention teaching has long been the traditional approach to education. Studying for tests, sitting in lectures, and trying to visualize history through a textbook constitute the typical classroom experience.

However, the introduction of VR has made it possible for students to experience their education in more immersive and engaging ways. VR can transport students from their desks to the Roman ruins, let them mix volatile chemicals and see the reaction without being physically harmed, and allow them to not only see but interact with virtual worlds.

As a result, the teacher’s role is shifted from delivering content to facilitating learning. “Teachers will be focused on creating conditions for exploring, rather than providing ready-made knowledge,” according to Adobe.


Educational Use of VR

Virtual reality in education has a wide array of applications that benefit both educators and students.

Often, teachers are thrust into classroom settings right after earning their undergraduate degrees. However, they still have a lot of real-world learning to do when it comes to putting their skill to practice.

VR offers a way to further educate teachers before they set foot in the classroom. Through systems such as TeachLiVe, educators can practice lessons in a mixed-reality setting, according to DistrictAdministration.com. During the lesson, student avatars respond as if they were actually in a classroom, allowing teachers to hone their skills. This also assists current teachers by letting them practice difficult lessons and gauge the potential learning of their students.

Crosswater Digital Media has even created a system that transports educators into scenarios of conflict, according to Ed Tech. This allows them to learn how to deal with a difficult student or situation before real-life consequences occur.

VR can also help students and teachers gain classroom insights by recording and recreating real classroom sessions. As software company vSpatial highlights, teachers have already begun to create detailed recordings of lessons through 360-degree cameras. If a student misses a class, they can use these VR recordings to be digitally transported into their classroom, see their peers, and learn as if they were there.

Virtual classroom sessions can be equally beneficial to teachers. By recording and revising classroom sessions, teachers can gain valuable insights into both their students’ learning styles and their own approach to teaching.

VR also expands the potential for student field trips and laboratory experiences. Educational excursions were once limited by cost, distance, and accessibility, but VR eliminates these barriers and provides endless opportunities.

Google Expeditions created virtual reality spaces for students to explore, from swimming with whales to visiting Mars. Students can even board real school buses that have been transformed into VR landscapes by replacing windows with 4K displays.

Lead the Future of Education

As VR becomes more relevant, accessible, and beneficial to school settings, teacher education is also evolving. Through the Master of Education in Educational Leadership and Master of Arts in Education with a specialization in educational technology, LSU Online is preparing future leaders to leverage cutting-edge technology such as virtual reality in education. Both master’s programs equip educators to advance their careers in education and transform classrooms by embracing technology.

How Instructional Technology Can Improve the Learning Process

What Is Student Development Theory? Understanding How College Affects Students

How to Become a School Counselor

Adobe, “How VR in Education Will Change How We Learn and Teach”

Built In, “Virtual Reality in Education: An Overview”

DA, “How Virtual Reality Is Changing the Game of Teacher Training”

Ed Tech, “How Virtual Reality in the Classroom Is Providing Training for Teachers”

Forbes, “The 5 Biggest Virtual and Augmented Reality Trends in 2020 Everyone Should Know About”

vSpatial, “Distance Learning Is Poised to Be Revolutionized by Virtual Reality”